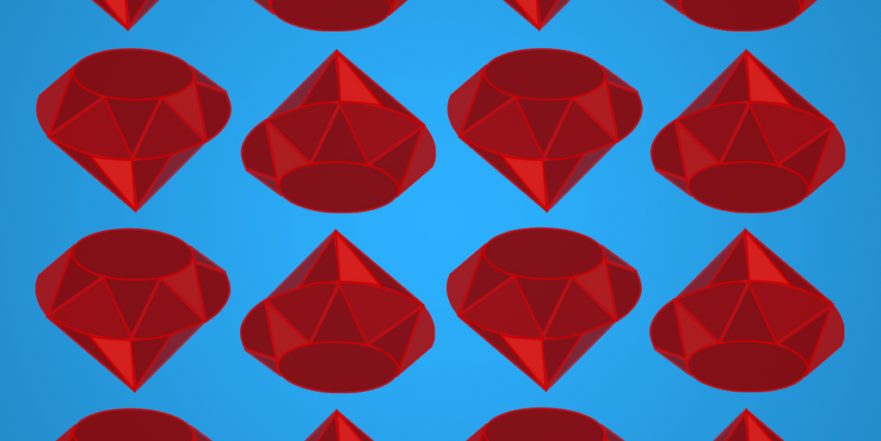 Developers already know of Ruby as one of the most popular and beloved programming languages in the world. And while it’s not the hot new language anymore, it continues to power well-known applications like Twitch, SoundCloud, and Hulu, as well as the project-management tool Basecamp, open-source repository GitHub, and the hospitality marketplace Airbnb.

At its core, Ruby’s value is that it allows developers to write less code while accomplishing more than other languages and frameworks. The challenge is that Ruby on Rails, the primary framework for the Ruby language, is “opinionated software.” It codifies under the assumption that there is “a best way to do things,” and encourages users to design that way (and in some cases to discourage alternatives).

If you specialize and invest the time in learning how to develop with Ruby, you’ll find that it’s quite easy to get comfortable and efficient. “The Rails Way” leads to a tremendous increase in productivity. However, if you try and bring old habits from other languages into your Rails development, you’ll likely have a more challenging experience.

Luckily there are plenty of tools to help Ruby developers dive right in and stay efficient when building applications. But first, let’s look at Ruby on Rails.

What is Ruby on Rails

The Rails philosophy is grounded in two major guiding principles:

To start with Ruby, developers should be familiar with the API library, which contains a collection of Model-View-Controllers (MVC) that make it easy to build on the different layers of your application.

1. Four Days On Rails: This toolkit is a condensed guide to Ruby on Rails that aims to give developers everything they need to know to start building applications in just four days. It can be a great resource for developers looking to understand the fundamental philosophies and “best-practice” assumptions at the heart of Ruby.

There are multiple Ruby tools available to add user authentication to your app. The three tools below are completely free and open-source. Visit their GitHub pages to learn how to implement.

3. Clearance: This is a similar tool to Devise mentioned above, but much simpler. Clearance is good for just basic email/password authentication setup.

4. CanCanCan: CanCanCan allows you to grant access rules to users regarding their data. It also enables controller helpers that simplify the code in Rails controllers by performing the loading and checking of permissions in your application’s controllers.

Building an app for the world stage? Check out the follow location tools for Ruby. Again, these tools are free, open-source, and available on GitHub.

5. Geocoder: Geocoder allows you to handle building applications that may require specific geo-locations. It provides an easy integration with several geocoding APIs and is easily integrated into Rails.

6. Globalize: With Globalize you can store translations to your data for any locale you want, and pull that data automatically from a physical or cloud database.

Ruby on Rails can be used for both front-end and back-end development. If you’re using Ruby for front-end, you’ll need additional tools to get the look you want. Check out these formatting tools for help:

7. Bootstrap: Bootstrap is essentially a component library, a great resource for both enterprise-level software teams as well as early start-ups looking to build apps with responsive formatting and styling elements.

8. Autoprefixer: This essential tool for modern web-users that navigate sites on multiple browsers. When adding to your app, you can be sure it will look great on every browser.

9. Formtastic: Formtastic is a quick way to add responsive forms to your app. With the flexibility to style it as you like, and support multiple models in the same form, it’s a great tool for any web app.

If your application includes data collection or uses a database, you’ll want to use one of the following open-source tools.

10. PaperTrail: An easy tool that allows you to keep track of all changes in your app’s data. Simple and effective.

11. Audited: Similarly simple to PaperTrail, but with a bit more flexibility in what data you can collect.

12. Paperclip: This tool builds integration for saving files in your app. It is effective for simple apps to get rolling but may not be robust enough for enterprise-level applications looking to scale.

The Ruby community has developed useful testing tools to help you optimize your application. These tools can find bugs, security vulnerabilities, and save you time by simulating test scenarios. Check out these open source tools:

13. RSpec: RSpec remains a classic testing tool because it is compatible with all the other test-related tools. RSpec also lets developers have more readability by providing more documentation and web examples than other testing tools.

14. Faker: This tool generates random test data for your application. This can save lots of time because you won’t need to waste time writing fake data. Since faker generates data randomly, your team can easily experiment with a number of variables to test your apps performance.

15. RuboCop: This is a popular code testing tool across the Ruby community. By defining a list of rules—or “Cops” for your Ruby project, you can check code for specific style, metric, and controller issues. This tool can also check for automatic fixes and report them before deployment—all with the goal to save your team time.

16. Brakeman: This testing tool helps developers find security vulnerabilities and is particularly valuable for both startups and enterprises handling transactional data. Easily spot issues with SQL injection and unsafe redirects that could potentially be flaws in your application.

Ruby is great for building applications from scratch, it has historically been difficult to scale. Scaling with Ruby isn’t impossible, however, as massive companies like Shopify and Airbnb show.

When scaling with Ruby, it’s even more important to closely monitor your application performance. Performance issues can come stem from a number of issues, from poor server architecture to bad code. That’s why Stackify is working on updating Retrace to support Ruby development. Retrace gives you code-level insights into your app’s performance so you can quickly fix the cause of the issues. It also helps you find bugs and monitor your logs, giving you a 360-degree view of your app.

Ruby on Rails may seem like an esoteric programming framework, but both large-scale web applications and startups can benefit from its focused approach to delivering quick builds. Developers can focus on building flexible web applications by incorporating the various tooling APIs from the continuously-growing Ruby development community.

It looks like a steep learning curve to get started, but Ruby offers developers time-saving techniques in the long run, all based on the simple principles of a simple convention.

Look out for more Ruby resources coming soon to the Stackify blog. In the meantime, below are some additional resources.